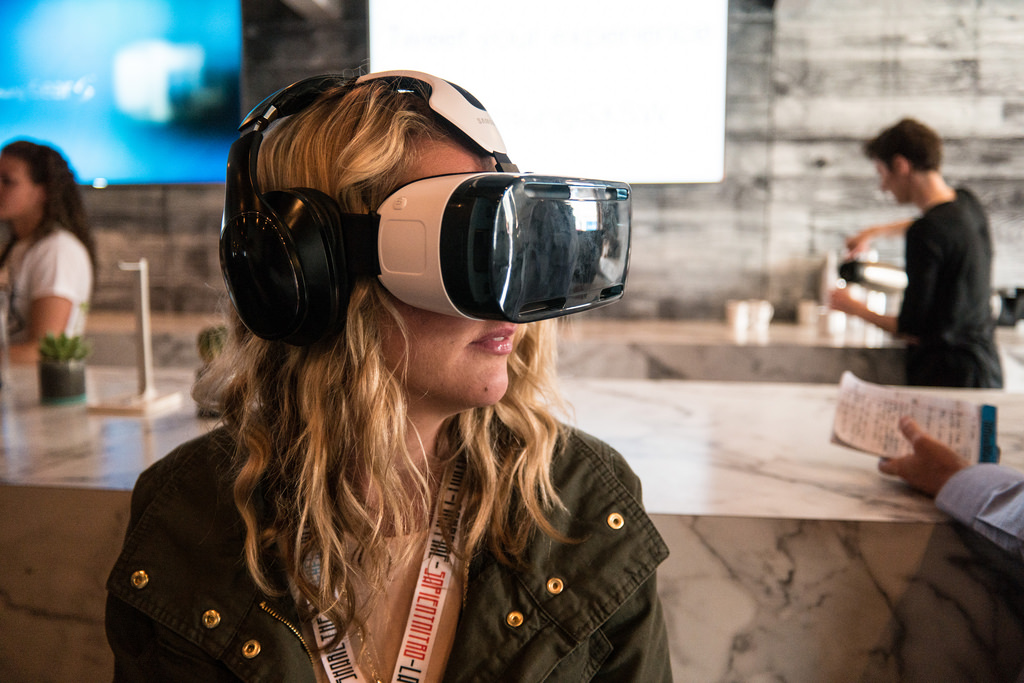 Virtual Reality, or VR as it is known in it’s short form, is sneaking up on us and is becoming an amazing thing. It’s one of the biggest things in our lives that nobody really knows about. In fact, when Facebook bought Oculus Rift for 2 billion dollars there was very little news said about it. A lot of people think that virtual reality is a fad, and will pass, but they are wrong and the truth is it is still gaining momentum. Here are here are just a few things to keep your eye on, just a few of the latest innovations to keep your imagination going.

It’s all very good and nice to be in a virtual world, but you can’t feel anything. A haptic suit is the first steps towards correcting that. The word haptic is just a fancy way of saying related to touch. Imagine a full body suit that as you walk near a fire it gets warmer, or if somebody pokes you in the arm, you feel the poke. Imagine being able to use your hands to pick something up and feel it as you hold it. That is all possible today. It is still quite primitive but it is getting better and better at an amazing rate. Soon you will be feeling the breeze on your skin, and feeling the grass beneath your feet, though maybe not in this decade, but it is on the way.

We all have more senses than just touch. There is sight, sound, smell, hot and cold, wet and dry. There are companies that are working hard at being able to produce all the senses you can imagine, to sink you deeper into a state of immersion where you can lose yourself and feel like you are really there. There are even companies that are taking the tech to such a level of detail that you can tell the difference of the sounds as they bounce off walls, as well as echo against hard and soft surfaces. Thier goal is to reproduce real life as much as possible.

VR and AR are two separate Technologies. Some companies don’t think they should be and are trying to merge the two together. This would be by either adding virtual environments on top of real ones or bringing some of the real environment into your virtual world. For example, it can scan your bedroom and everything in it, and reproduce that inside of the headset. When you see your wall, bed, or dresser, they are the same in both environments. This will expand what you can do in a virtual world, but will also bring the virtual world close enough to where you are not sure if you are in the real one or the virtual one.

There is a large group of companies working on a virtual reality treadmill. These are omnidirectional treadmills and are created with various different techniques and technologies. They all have the same basis though, the ability to walk around unconstrained in a virtual world. Imagine being able to jog down a hiking trail or walk through a medieval city, and still never leave your bedroom.

If you have never heard of a light field camera, it’s pretty amazing. It isn’t like a normal camera that you focus and shoot, it is a camera that records all the light fields that are coming towards it, hence the name, and it gives you the ability to manipulate them later. The company that pioneered it has also made a 360-degree light-field camera that will allow an amazing level of immersion in live videos that was never possible before.

Telepresence has been around for many years. There are already medical companies that offer consultations and diagnosis from a video feed, and web chat. With VR we can take that a step further. You can experiance things in a way that you never could before. You can go to a wedding when you are 3000 miles away and experience it as if you were there. You can have a business meeting face to face and be a continent apart. There is even a company that is working on guard robots that have a live guard watching and managing it as if they were right there, allowing for much lower guard expenses. Last year there was a medical operation that allowed hundreds of doctors around the world to watch it from close up as it was happening and learn a new technique, making the operating room gallery a thing of the past.

Every month there is some new innovation in VR, people that know about it are excited about it and can see the potential to change the future. In a few short years, people will not understand how we lived without it, just like the cell phone and the internet today. VR is an amazing thing, and we are just scratching the surface of it. You owe it to yourself to try it out.